City Life Dundee caught up with some of the musicians who were performing in the opening week celebrations, to find out their thoughts on the museum and the celebrations… 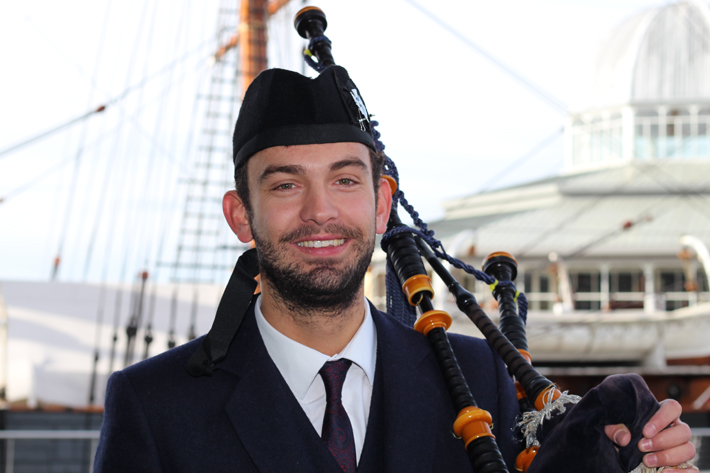 “This was like the birth of a new horizon, it really was incredible.”

The last time we saw Craig Weir, he was piping the pupils of Our Ladys RC Primary into their new school on the Hilltown, and here he was again, piping in another piece of Dundee history at the official public opening of the V&A Museum. We stopped with Craig for a moment to talk about the V&A opening…

I was here three years ago and played as the first spade went in the ground when Kengo Kuma was here, it was just a building site and now to have come full circle, welcoming the First Minister of Scotland and various other dignitaries, and to be here also to pipe in the very first public visitors to the V&A, is amazing. I’m obviously really proud that I’ve been on that journey with the museum and I’m looking forward to continuing to work with such an amazing team inside this building. 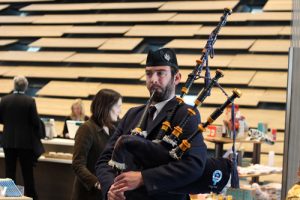 The building is phenomenal and the light show on the Friday night was incredible, it was hard to believe actually we were in Dundee. Over the years, Dundee has been seen as the underdog city compared to some of the other bigger cities, like Glasgow and Edinburgh. Last night, standing there, it felt like this was Dundee’s coming, it was kinda like Dundee’s moment, this was like the birth of a new horizon, it really was incredible standing there and watching the light show. 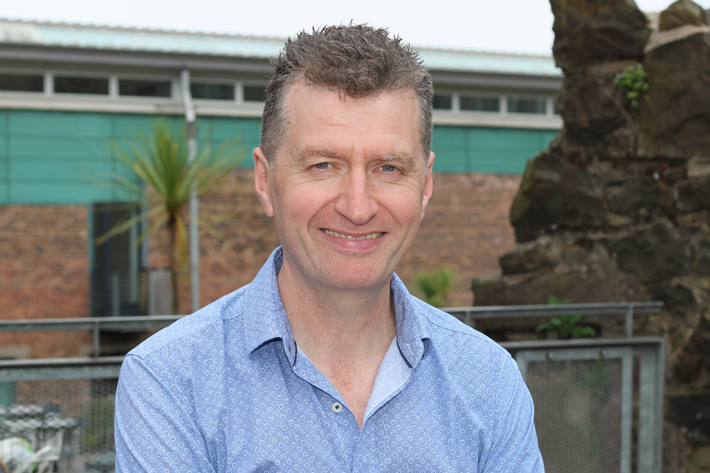 “The building symbolises hope and confidence, and all Dundonians should celebrate these positive changes.”

It was fitting that Simple Minds bass guitar supremo Ged Grimes brought one of the biggest shows to ever hit Dundee in a generation, especially fronted by two of Scotland’s greatest ever stadium-rock showmen, Jim Kerr and Charlie Burchill, to kick start the V&A waterfront celebrations that week. We caught up with Ged to ask what he had made of the event and for his thoughts on the V&A…

It was such a special night for all of us. Jim and Charlie are always talking about how fond they are of Dundee and the fond memories of gigs they played in the city in the early days. They have always loved coming up to Dundee, so to return to play at the Waterfront, the week of the V&A celebrations, was an unforgettable occasion for all of us. The fans that showed up that night were not just there for the band, but also to celebrate the culmination of many years of hard work to transform the city into the vibrant, positive place it has become. As a Dundonian, I can’t begin to tell you how proud I was of the city that night.

The arrival of the V&A has been so significant for Dundee. I am currently in the middle of an extensive USA and Canada tour and it amazes me when people are saying, “Oh, we have read all about Dundee and we really want to visit the city!”. The building symbolises hope and confidence, and all Dundonians should celebrate these positive changes. When we tour, we visit many places that have a similar industrial past, like Dundee, but there are few cities that have embraced change as well as Dundee has. 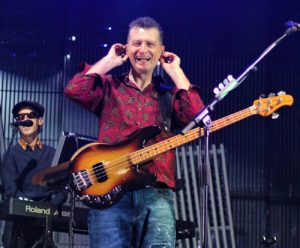 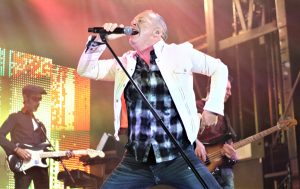 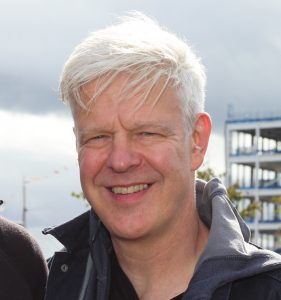 “Dundee is really welling up with emotion just now, I feel it from people who don’t normally get that way.”

We caught up with Deacon Blue guitarist and Dundonian Gregor Philp, after his performance with Gary Clark and the Sistema Choir…

As you know, Dundee is really welling up with emotion just now, I feel it from people who don’t normally get that way. People are thinking about how well Dundee is doing and just the great feeling and great space we’ve got with Slessor Gardens and the V&A.

It’s all come together for me, being able to play with my best pals and playing some of my favourite music of all time of Gary Clark’s. Also, playing with some of my favourite musicians; Dougie Vipond, Kit Clark, Andrew Mitchell, Brian MacAlpine, and of course our pal, Chris van der Kuyl, doing the music production. We wanted it to be the best so we spared no amount of effort to make sure we did it right. When the Sistema kids came on stage it was wonderful and very emotional, they were great and that brings it all back round.

There’s definitely a new spirit in Dundee, but as Jim Kerr said at last weekend’s opening concert, “It’s incredible, what’s going on with Dundee just now, but just remember Dundee’s always been brilliant!”, and that’s the way I genuinely feel about it. Dundee’s an amazing place, it’s just been a little bit secret and hiding its light under a bushel on purpose. 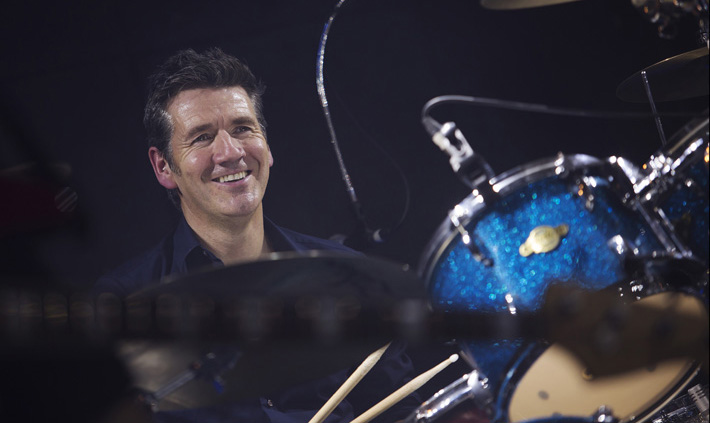 “Dundee has got a real creative vibrancy about it just now.”

It was a glorious experience for me as I’ve always been a fan of Gary Clark and Danny Wilson, and to get a chance to play on the stage with Gary Clark was just brilliant and amazing, and Dundee has got a real creative vibrancy about it just now, and seeing the V&A here is a beautiful thing and to be part of the celebration of that is a real honour for me. 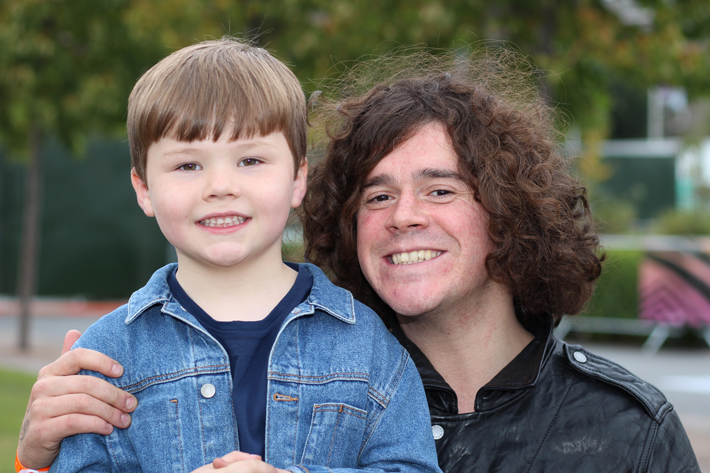 “Monumental, historical times and always glad to be associated with Dundee.”

We caught up with singer Kyle Falconer as he was mingling with the V&A crowd after his performance, to ask him for his thoughts on performing at the V&A celebrations, the V&A building itself, and on his new debut solo album, No Thank You, reaching number one in the official record store charts…

I didn’t get asked to appear at the V&A celebrations ’til the last minute, so initially felt left out, but when I was asked I finally felt that it was meant to happen. Monumental, historical times and always glad to be associated with Dundee. The band played class and seeing Gary Clark and the Sistema Choir was amazing! I haven’t been in yet but I’m told it’s banging! I think it looks class as well, great times for all.

It’s always good to get recognition in the charts, however big or small it may be. Worked like mad to get this album done, so jus’ jiggin’, to be honest. I’m touring, touring and touring at the moment, and writing a lot as always, and have got some exciting news soon. So hopefully, when things calm down, I’ll get a chance to visit the V&A. 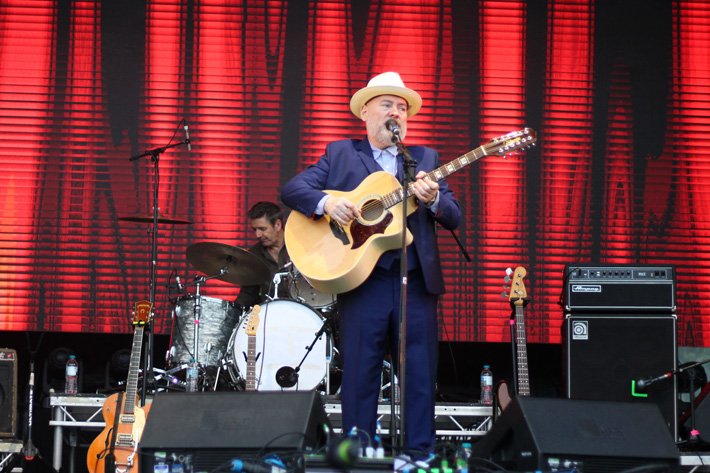 “The V&A is the most exciting thing to happen for the city, certainly in my lifetime.”

It was fitting that Gary Clark brought the spectacular week of V&A celebrations at Slessor Gardens to an emotional finale with the Michael Marra inspired Dundee’s Sistema Choir singing the Danny Wilson classic “Mary’s Prayer”. City Life spoke with Gary to ask for his thoughts on the celebrations and the V&A museum…

I felt honoured to be part of the 3D Festival to celebrate the opening of the V&A and it was great that the organisers had thought to feature local music in the celebrations. Dundee’s music scene is as alive and exciting as it has ever been. If Ged Grimes hadn’t been on the road with Simple Minds then we certainly would have considered a Danny Wilson reunion for such an important event for the city. However we’ve always agreed that there’s no Danny Wilson gig without all three of us on stage. Finishing with a version of “Mary’s Prayer” and sharing the stage with the kids of the Sistema Choir was very moving for all of us in the band.

I can’t imagine that Michael would’ve thought of the V&A as anything less than a triumph for the city that he loved. On the day, my friend and front of house mixer, Chris van der Kuyl, and I felt that the Bard of Dundee should be present, and so we played one of Michael’s live sets over the PA. It was wonderful to hear his voice booming out over the large crowd at Slessor Gardens.

The V&A is the most exciting thing to happen for the city, certainly in my lifetime. The impact that this iconic building will have on the city, culturally and economically, cannot be underestimated. The knock-on effects of more visitors to the city cannot fail to be a catalyst for so many good things. To say I’m excited is an understatement.

City Life also caught up with some of the some of the people behind the V&A project and some famous faces who were in town. Use the links below to read more or to see our photo gallery.