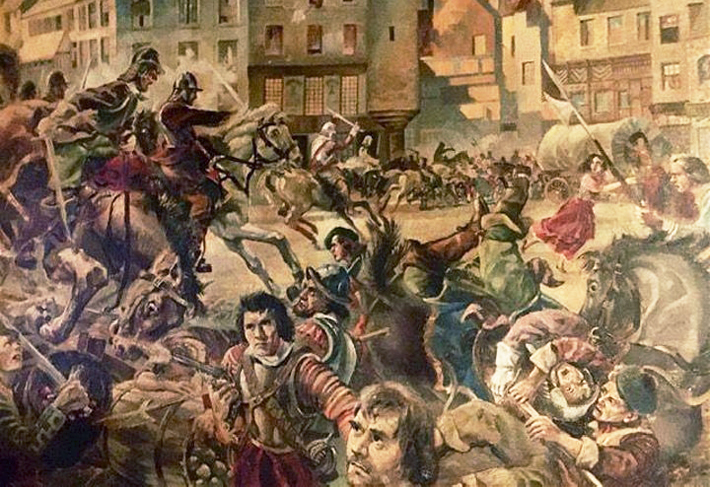 “English soldiers were given leave to plunder the town…”

The execution of Charles I, in January 1649, sent shock waves throughout Britain and Europe, and triggered a wave of popular sympathy for the dead monarch that he had never enjoyed during his reign. Even the Scottish government, comprising hardened covenanters of the ‘Kirk Party’, were shocked, and reacted by proclaiming the dead man’s son Charles II, at Edinburgh cross. For Oliver Cromwell, by now the recognised leader of the new model army, the Scots proclamation was a troubling development, which, alongside rebellion in Ireland, fanned his growing fears for the safety of the infant English republic. His response was swift and brutal: in England, the left wing ‘levellers’ – who had opposed the royal execution because it was sanctioned by a ‘purged parliament’ – were suppressed, and Ireland ruthlessly re-conquered, before Cromwell turned his ironsides towards Scotland. The war between King and Parliament was now becoming transformed into an English takeover of the British Isles. 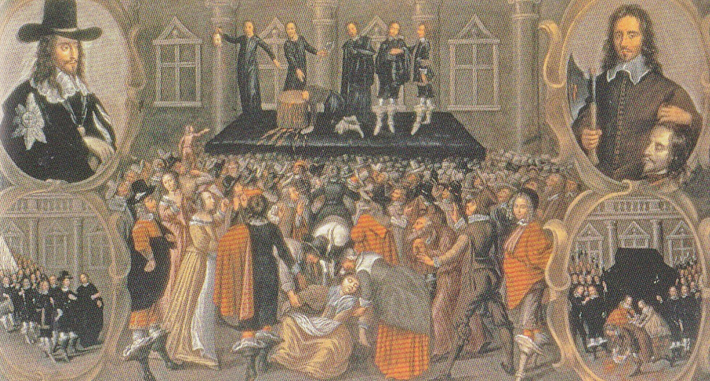 The covenanter leadership, blinded by divine inspiration, appeared oblivious to the perilous situation they now faced. Political divisions and repeated ‘moral cleansings’ meant that the Scottish army was now a shadow of the ‘godly host’ that had broken the royalist cavaliers on Marston Moor in 1645. A very different outcome followed at Dunbar in September 1650, when Cromwell’s invasion force met the covenanter army head on: urged forward by their ministers the Scots charged, but were decisively routed. Edinburgh then fell without a shot being fired, forcing hundreds of well-born refugees to flee with ‘thair best guidis over to the north syde of Forth’[1], and on to Dundee. 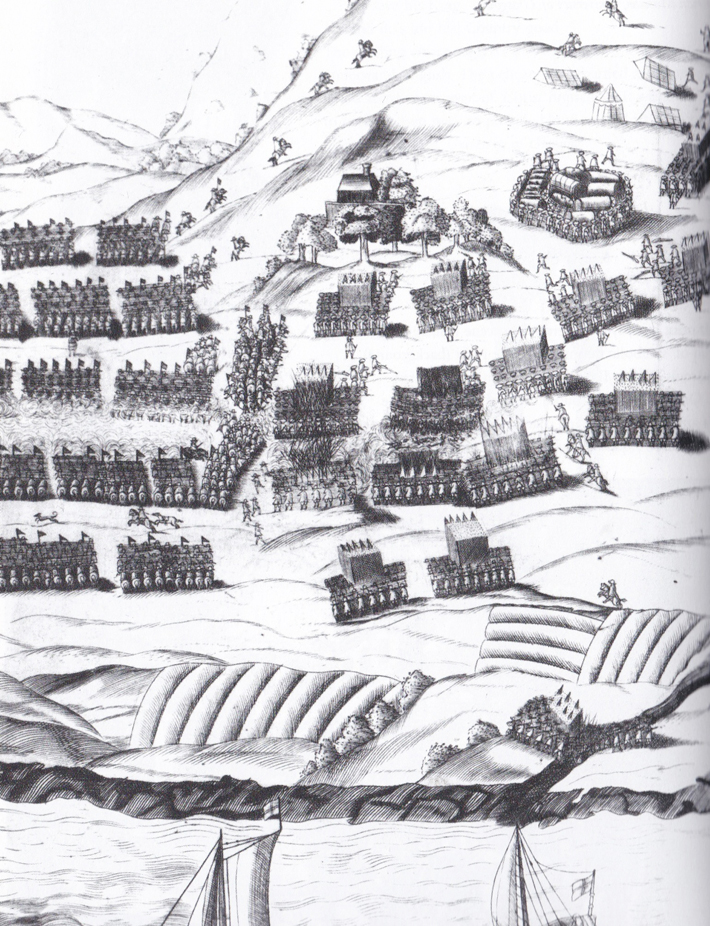 Despite humiliating defeat, Scottish patriotism soared in the wake of Dunbar. Even the western Whigs, extreme covenanters and natural allies of the puritans, rejected peace so long as English troops remained on Scottish soil, thus stymying Cromwell’s attempts to create a puritan fifth column. Then, in January 1651, in a rushed ceremony at Scone, Charles was crowned, Charles II, King of Scotland and England, by a ruling Kirk Party, which, riven by internal divisions and increasingly challenged by the Scottish nobility, desperately wished to believe he could be made their puppet king. Any lingering hopes of a negotiated settlement with republican England were dashed – it would now be war to the end.

By the summer of 1651, the English army had rooted out most remaining pockets of resistance in Fife and central Scotland, meaning that Dundee now lay directly in their path: the town magistrates responded by ordering the defences to be ‘readied, in consideration of how important it would be for the peace of the country that Dundee should be well fortified and secured from the common enemy.’[2] The town walls were found to be too weak to repel a siege: work on strengthening them was hurriedly undertaken, and the townswomen were deployed in preparing defensive ditches, whilst tenements outside the walls, in the Cowgate, Wellgate and Seagate Port were ordered to be demolished, to ensure clear lines of fire. In early August 1651, Stirling Castle fell to the English and defensive preparations in Dundee were redoubled: the training of the town militia was intensified, artillery pieces were sited along the sea wall, in the Lion’s Round and on Corbie Hill (see map of town), and all shipping in the harbour was thoroughly searched for gunpowder. 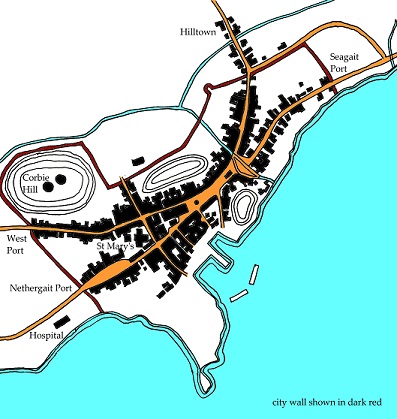 With the last major Scottish army pressed into yet another invasion of England in support of the royalist cause, the nation was now virtually defenceless, allowing the ex-royalist turned Cromwellian, General George Monck, and his 7,000 troops to capture Perth unopposed, before advancing on Dundee, which was reached on the 26th August. Over the next few days, the English dug in their artillery on the heights overlooking the town, from Hawkhill in the west to Blackscroft in the east, whilst the English frigate, Speaker, ‘warned’ Dundee with a volley of cannon fire. Elated by ‘fake news’ of a Scottish victory in England, the town’s military governor, Robert Lumsden, dismissed the English terms of surrender, and invited the besieging force to lay down their arms. 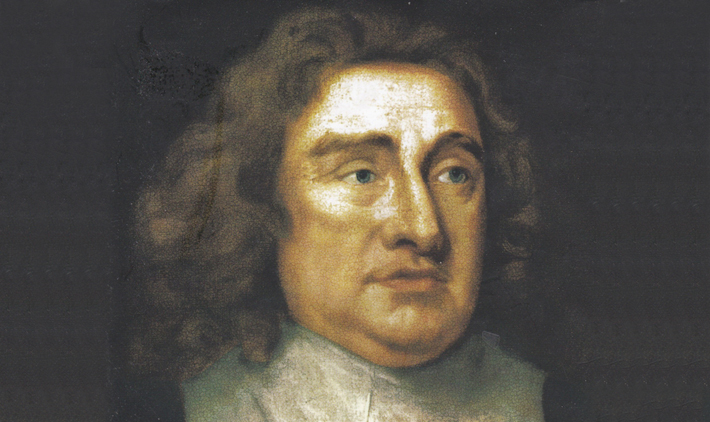 By the evening of 30th August, with siege preparations complete, the English guns set to work, opening two breaches in the town’s defences, which were successively widened over the next couple of days. For a young Robert Sibbald, the future Scottish Geographer Royal and author of a celebrated natural history of Scotland, an English cannon ball, fired during this opening phase of the siege, almost ended his young life before fame and fortune beckoned. In his memoirs, Robert recalled growing up in the Murraygate, where a small wooden screen had been erected in the middle of the thoroughfare as protection against the English shot being discharged from their cannons on the Hilltown. On one occasion, his eight year old sister, Gelas, was passing the wall, but her head was exposed. Alarmed by the potential danger to his wee sister, Robert raced from his parent’s tenement to bring her to safety. The two bairns were noticed and a cannon ball fired at them, but it missed and bounced harmlessly along the Murraygate, before being picked up and kept by Robert as a memento.[3] 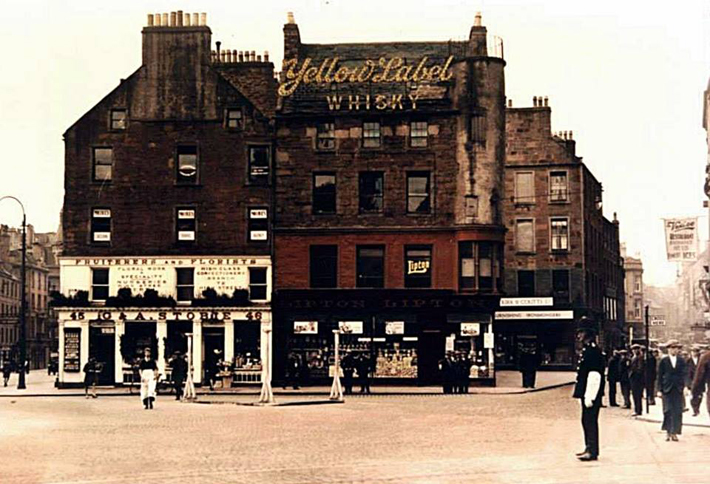 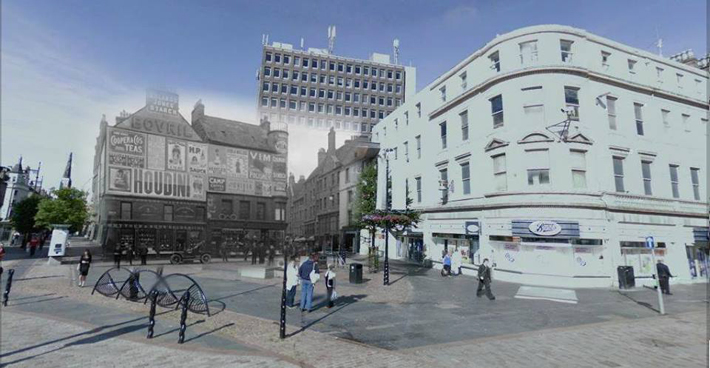 At 4am on September 1st, the siege proper opened with a sustained English cannonade. For the next six to seven hours a furious artillery duel ensued, during which three English horses were killed by one Scottish shot alone, and an English gun commander and several gunners were injured when their cannon was also hit. The defenders on the walls kept up a stout resistance, and a steady stream of insults, calling the unmounted English cavalrymen clegs (horseflies). The English, however, held the high ground, so that, eventually, the existing breaches in the town’s defences became yawning gaps. At around 11am, the English storming parties advanced on the shattered remains of the West and East Ports, whilst English seamen, armed with axes, hacked their way through the Murraygate Port.[4]

Despite heavy English losses, during the brief but bloody frontal assault, the defenders on the damaged walls were quickly overcome, and the English storming parties swept into the town. General Monck’s secretary reported that, ‘after about half an hour of hot dispute, diverse of the enemy retreated to St Mary’s Steeple’[5], under the command of governor Lumsden. They managed to hold out for a few hours more, before surrendering when they were engulfed by suffocating smoke from smouldering fires of wet straw that the besiegers had piled up in the base of the tower. As Lumsden led out what remained of the town militia from the Steeple a Major Butler stepped forward and shot him in the face. His corpse was then summarily decapitated and the severed head mounted on an abutment of St Mary’s steeple. 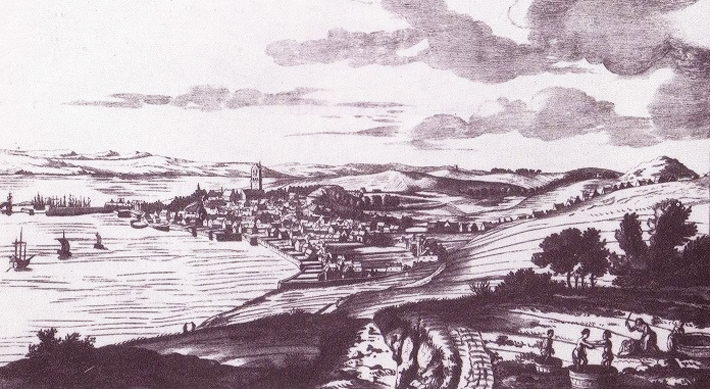 Dundee from the east

With the siege completed, the English soldiers were given leave to plunder the town for one day and one night. Widespread rape, murder and looting followed, and, despite Monck’s repeated orders to desist, following the passing of the twenty-four hour deadline, individual attacks by English troopers continued for two weeks, encouraged by an increasing shortage of provisions and the breakdown of the military supply chain. Monck only regained full control of his troops on the 15th September, when he ordered the establishment of military tribunals with draconian powers to deal with the looters and rapists.

The siege and its aftermath claimed around 7-800 lives, including 70-80 townsfolk, however, all of these deaths were totally unnecessary. Lumsden had wrongly believed that Dundee would be imminently relieved, but all Scottish forces north of the border had been effectively destroyed, whilst a large part of the nation’s military and political leadership now languished in English custody, following their wholesale capture at Alyth three days before Dundee had been stormed. Lumsden would surely never have refused terms if he had been aware of the real situation.

The final hammer blow to Scottish hopes came three days after Dundee’s fall, when the last remaining Scottish army in the field was routed at Worcester. Now a monarch without a kingdom, Charles was forced to flee for his life. When he eventually reached France and it was suggested to him that he should return to Scotland, he exclaimed that he would rather be hanged first – he had seen enough of Scotland and its people to last him a lifetime.[6] Meanwhile, thousands of Scots who had fought for him were left to ponder the prospect of execution, imprisonment or transportation as indentured slaves to the English colonies of the Caribbean and Virginia.

In the next article we will re-examine the legend of Grizel Jaffray.