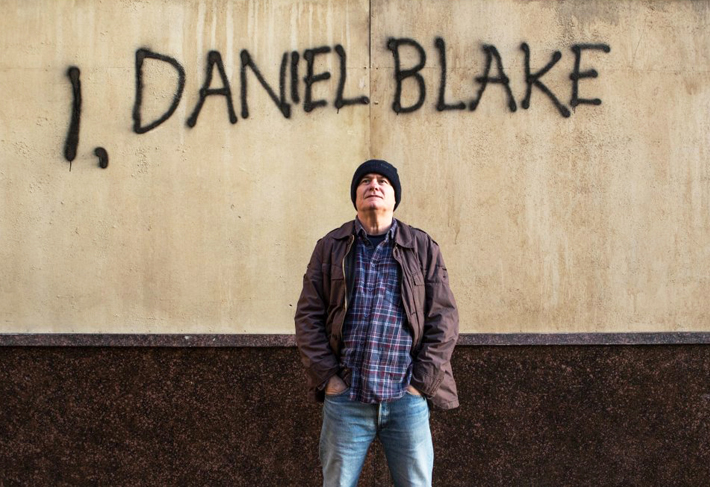 The City Life team were recently invited to a free public screening of the BAFTA winning movie ‘I, Daniel Blake’ at Stobswell’s Arthurstone Community Library. This was a brilliant initiative set up by Dundee Against Austerity and supported and funded by Unite Communities. What a free and easy night this was going to be, City Life just had to wander around the corner from our office grab a free cup of tea, watch the movie, and then detour home via Dora’s Fish & Chip Shop on Dura Street. Little did we realise that our healthy appetites were heading for an abrupt halt. 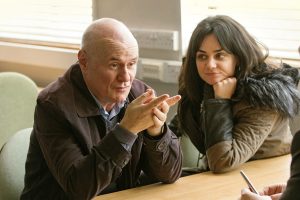 Director Ken Loach and Scottish screenwriter Paul Laverty took the audience through a heart-wrenching journey of the struggle and injustice experienced by two vulnerable people down on their luck and seeking help from the government welfare system. Fifty-nine year old Daniel Blake, played by Dave Johns, is denied employment and support allowance despite his doctor finding him unfit to work on health grounds, while Katie, played by Hayley Squires, is a struggling single mother. The pair form and unlikely friendship after a chance encounter at the Jobcentre that results in them both getting sanctioned. Having fallen victim to the sanction regime imposed on many unfortunates in the same position, they are forced into eating from foodbanks. Katie is eventually so overcome by desperation that she resorts to shoplifting, then escorting, in order to provide for her children. Daniel tries to help Katie out of her desolate situation as much as he can but they both ultimately withdraw into their broken spirits. Daniel eventually cracks and spray paints “I, Daniel Blake, demand my appeal date before I starve” on the DWP government building.

We Are All Daniel Blake

After the show a visibly shocked, sombre audience quietly disappeared into the cauld Dundee night. City Life hung around to talk to three of the men instrumental in these free movie screenings; Ronnie Swinton, Mike Taylor and Andy Duncan, from Dundee Against Austerity. We asked the lads what the passion is behind getting this movie shown free within Dundee communities,

“We’ve been through the system so we ken exactly what it’s like!”

“To promote oor initial anger, we taped a sheet on the wa’ o’ the DWP office and sprayed it with ‘We are all Daniel Blake’ because everybody’s joab in this day and age is precarious, and you can end up in that situation, and the structure of the DWP is that horrendous just now that folk that are going through it are more than likely to end up being sanctioned. They are going to hae to use foodbanks, they are going to hae to use other alternative means of earning a living, which is what happens to the lassie portrayed in the film. Nobody’s job is safe and no one can say that the circumstances they find themselves in, in terms of permanency or the salary they are on, isn’t going, in the coming period, to be severely challenged… Anybody can become a Daniel Blake.” 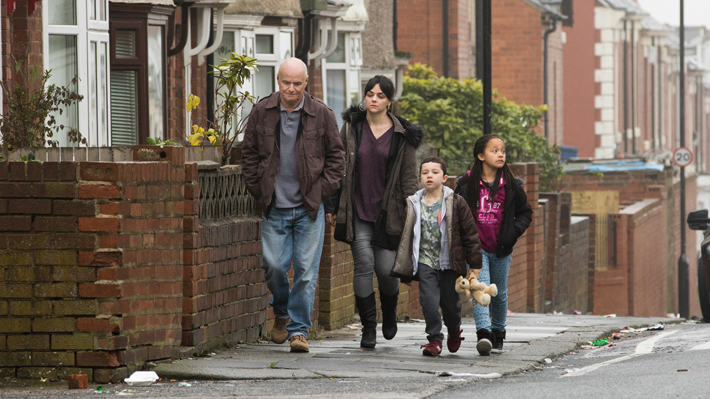 We Are With the People 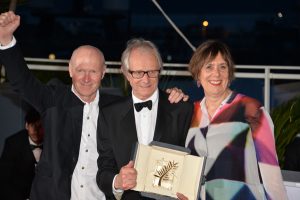 “Thank you to the Academy for endorsing the truth of what the film says, which hundreds of thousands of people in this country know, and that is that the most vulnerable and the poorest people are treated by this government with a callous brutality that is disgraceful, and it’s a brutality that extends to keeping out refugee children that we have promised to help, and that is a disgrace too.”

“In the struggle that’s coming between the rich and the powerful, the wealthy and the privileged, and the big corporations and the politicians who speak for them, on the one hand, and the rest of us on the other, then filmmakers – and we are all filmmakers here – the filmmakers know which side they are on, and despite the glitz and the glamour of occasions like this, we are with the people.”