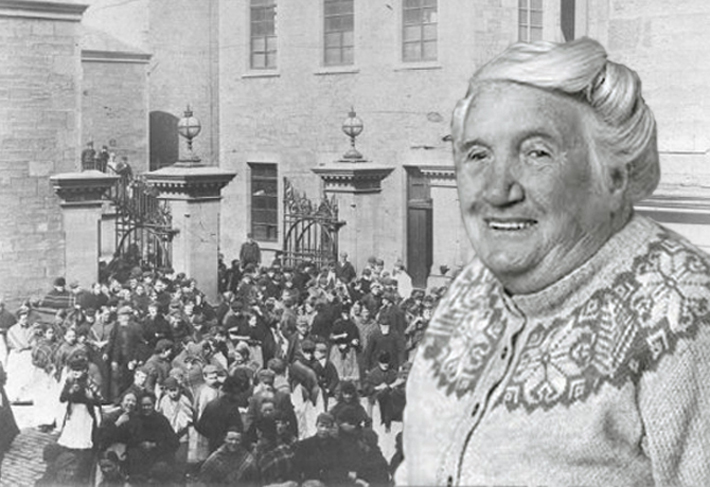 Mary Brooksbank is one of the most significant figures in the pantheon of the Dundee radical tradition. She was born ‘on a raw winters day’ in December 1897, in Shiprow in Aberdeen, in what she herself described, in her autobiography, as ‘one of the worst slum areas in the city.’ Her mother was ‘a fisher lassie… when she wasn’t being a domestic servant’ and her father’s family came from the parish of St Vigeans, in the Arbroath area, which during the late eighteenth and early nineteenth centuries was a hand loom weaving centre. Here, the auto-didactic artisan tradition drew on the much longer-lived north-east Scottish ballad tradition. Song and story-telling were therefore a central part of Mary’s inherited culture.

She was blind for the first four years of her life and received very little education. At the age of eight, her family, which included four brothers, moved to Dundee to seek work. At 11 she started work, illegally, as a shifter before being discovered and sacked, but she returned to the mills shortly afterwards. As she grew older Mary began to listen, note down and to collect the work songs she heard in the mills, such as ‘The Dundee Lassie’ and ‘The Strike Song’, before taking up the pen herself, particularly following her retirement when she produced many powerful and moving poems in the oary tongue. 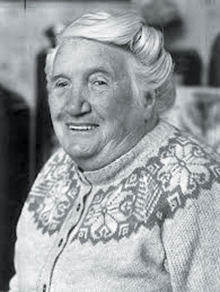 It would be migrants like Mary Brooksbank, shaped by the ballad traditions of rural Angus and the fishing communities of the north-east coast, as well as others from the Scottish Highlands and Ireland, who would develop and forge the oary culture that emerged out of the low mills and tenements of Juteopolis.

It is important to remember that Mary was not just a talented songstress, and one of the key originators of Dundee’s wonderful ‘Oary’ culture of song, she was also a determined socialist revolutionary, who was arrested on the first Armistice Day celebrations in 1918 for protesting at the shoddy treatment of returning veterans, and, at the age of 73, she visited Hanoi in 1970 in order to tend the wounded and to rebuild a city being bombed ’round the clock’ by B52 bombers.

Her reluctance to bow the knee led her to long periods on the dole and on local blacklists, meaning she had to eke out a living picking berries, and working in canning factories and at the sack sewing. The latter dreary occupation is the subject of one of her most celebrated songs, ‘Foondry Lane’, which she described in her autobiography, Nae Sae Lang Syne, as a ‘little narrow thoroughfare that ran from Blackscroft to Seagate’. It was also the location of the first flat she moved into when she married in 1924. Such was the condition of her new matrimonial home that she later admitted that ‘when I first saw it I wept… It could only be described as an outsize Dog Kennel.’ Brooksbank, therefore, knew of what she wrote. ‘Foondry Lane’ was home to ‘dockers, mill workers, trawlermen and shipyard workers’, but the song focuses on the wives who would turn to sewing sacks when better paying work had dried up. It was an occupation carried out in the home, away from prying eyes of factory inspectors, where the very young and the very old would be pressed into service for pitiably low wages.

In the early 1930s, Mary was expelled from the Communist Party for denouncing Stalin, and spent the rest of her life as an independent socialist. In effect, she became a one woman roving class war machine, who opposed all forms of oppression be it from employers, the state, labourites or, indeed, Stalinists. A poem that captures the sense of constant struggle that Mary often had to endure is ‘Nae Regrets’. 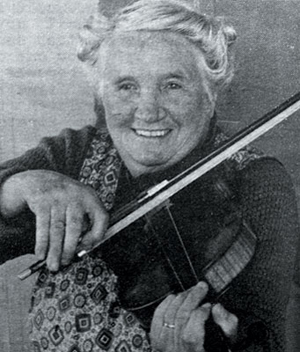 A gey roch road, fell snell weather
A fecht tae mak it a wee bit smoother
Gin we show our eident grit
We’ll mak it even better yet.

Langs the road and steys the brae
We’ll no’ lament, we’ve hae’en oor day
Tho’ it wisna’ a’ it shoulda been
A gey thrawn speil, sma’ rest atween.

I’, growin’ auld, I feel gey prood
In youth I ta’en the rauchle road
Gin I’d my time a ower’ again
I’d spend it jist as I hae dune.

Article written by Dr. Anthony Cox, lecturer in history at the Centre of Continuing Education, University of Dundee.

(This article comprises some passages taken from Anthony Cox’s, Empire, Industry and Class: the imperial nexus of jute, 1840-1940, Routledge, 2013)