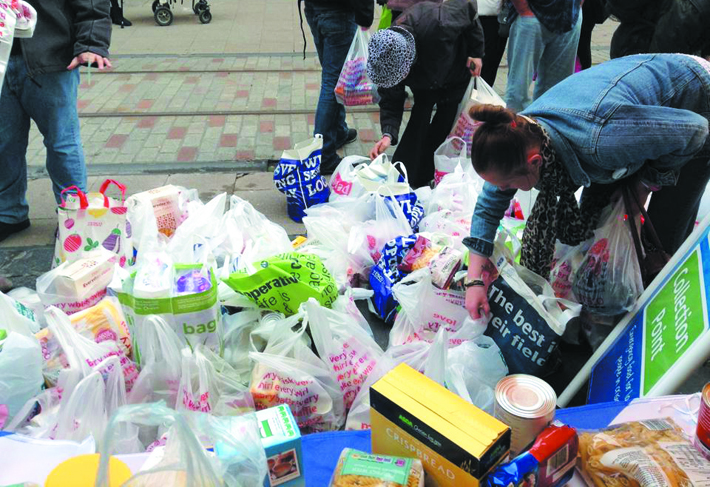 “0.6 per cent of Dundonians are suffering from malnutrition”

Did you know that in Dundee, on a daily basis, families on low incomes and/or cut off benefits because of Westminster austerity cuts are now being forced to use one of the many emergency food banks that are popping up all around Dundee city. In a resources rich country like Scotland, men women and children are now going hungry! Surely this can’t be happening in Scotland in 2014? Westminster has billions and trillions of pounds for wars, trident missiles and bailing out the banks so why are our good citizens now resorting to food banks?

City Life had to investigate so we spoke to a representative of the Scottish Unemployed Workers Network.

CLD – Why are so many people in Dundee now being forced to use food banks, what is the background to that?

SUWN – “Although some of the people using food banks are people who are in work, it is the case that there is a direct link between the increasing use of food banks and the increasing implementation of benefit sanctions by the Westminster Government’s DWP. It is estimated, by the Trussell Trust, that 6% of Dundonians are suffering from malnutrition – this group is exclusively made up of those who are having their benefits removed.

CLD – What kind of people are you seeing coming into the food banks, is it just scroungers and layabouts as the mainstream media would have us believe or are there normal working families and even children being affected by this?

SUWN – “We refer many sanctioned benefit claimants to food banks, and the typical person so referred tends to be someone with learning difficulties or who is mentally ill – these are the two groups most likely to be sanctioned, often as a result of not properly understanding complicated instructions and having little or no knowledge or facility with computers, or access to them.”

CLD – What can the Dundee people do to help during this festive period?

SUWN – “It is important to alleviate the real and immediate crisis that our most vulnerable co-citizens in Dundee are faced with, but it is also necessary to challenge the root cause of growing food and fuel poverty in Dundee and throughout Scotland, and, indeed, Britain. To this end we would appeal to Dundonians to come and support the ‘NO to Austerity, YES to Home Rule’ March and Rally in Dundee on the 6th December. By holding the Westminster elites to their promise of greater powers we would have the opportunity to bring welfare provision within the purview of the Scottish Parliament, which would immediately bring an end to the ConDem sanctions regime, and prepare the way for the development of a welfare system that is fit for purpose, and which is not used as a means to further disadvantage some of the poorest and most vulnerable people within our communities.”

Please spare a thought for your fellow Dundonians this Christmas and do your best to donate a food parcel to one of the many food banks around the City, listed below. Also look out for the ‘pop up’ collection points in the City Square and the Murraygate. 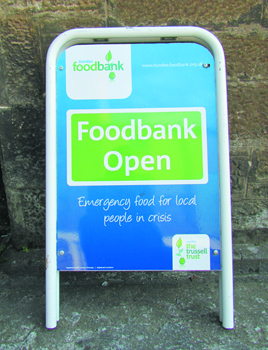 If need be, contact City Life direct and we will arrange for your food parcel to be collected.