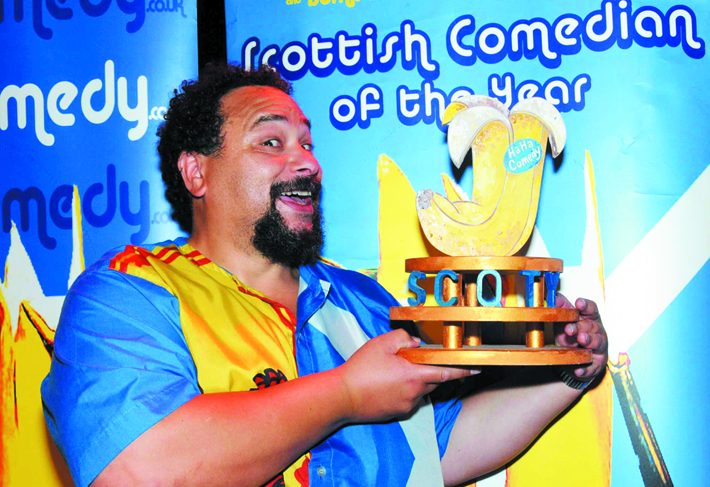 Funny man Bruce Fummey, a regular on the Dundee and Tayside comedy circuit, was crowned Scotland’s comedy king at a recent comedy awards ceremony in Glasgow.

This Scottish-Ghanaian, ex-school teacher and ex-rugby player is known as the finest comedian on the Afro-Celtic comedy circuit. As Bruce jokes “I am also known as the only Afro-Celtic comedian on the circuit!!” Bruce is the genuine article, a real funny man. City Life was lucky to see him perform recently at ‘Gracie’s Comedy Night’ in the Ferry and at ‘Jongleurs Comedy Club’ in the Dundee Rep. He commands the stage and the audience like a seasoned national comedian. God forbid if you catch his eye and he homes in on you, then that’s it, you become part of the evening’s performance!

Bruce isn’t scared to take on difficult subjects and still make them hilarious- Jacobites, science, and even the referendum; just some of his topics. His intellectual style of comedy is both informative and hilarious at the same time. This comedy pupil has definitely become the comedy master.

We caught up with Bruce…

CLD – How does it feel to be the comedy King of Scotland?

BF – It feels pretty much like the emperor who had new clothes made. Every time I walk out I feel a certain someone’s going to shout: “Rubbish, that fat bastard’s naked!”

CLD – Did you have to give an Oscars styled comedy speech at the award ceremony?

BF – My performance slot was in the first of three sections of the show and there was free beer backstage from then to the end. When my name was read out I had to run down to the front, get past security and round on to the stage. I had my raincoat on and looked a bit like a tramp!

BF – I continue to run the ‘Just Laugh’ comedy clubs, so anyone who would like a comedy night brought to their pub, club, hotel, restaurant or bathroom cupboard can give me a call. We have the Christmas party season, then Burns. I’m off to perform at the European Parliament Burns Supper in January, then touring to festivals in Perth, Adelaide and Dunedin. I’ll be back for April, register my Edinburgh Fringe show and it all starts over again.

Find out more about Bruce’s comedy and public speaking at: www.brucefummey.co.uk.

Look out for a City Life interview with the comedy king in the new year, if his schedule allows.

Previous PostLapland, the Home of Santa Claus Next PostFestive Life 2014